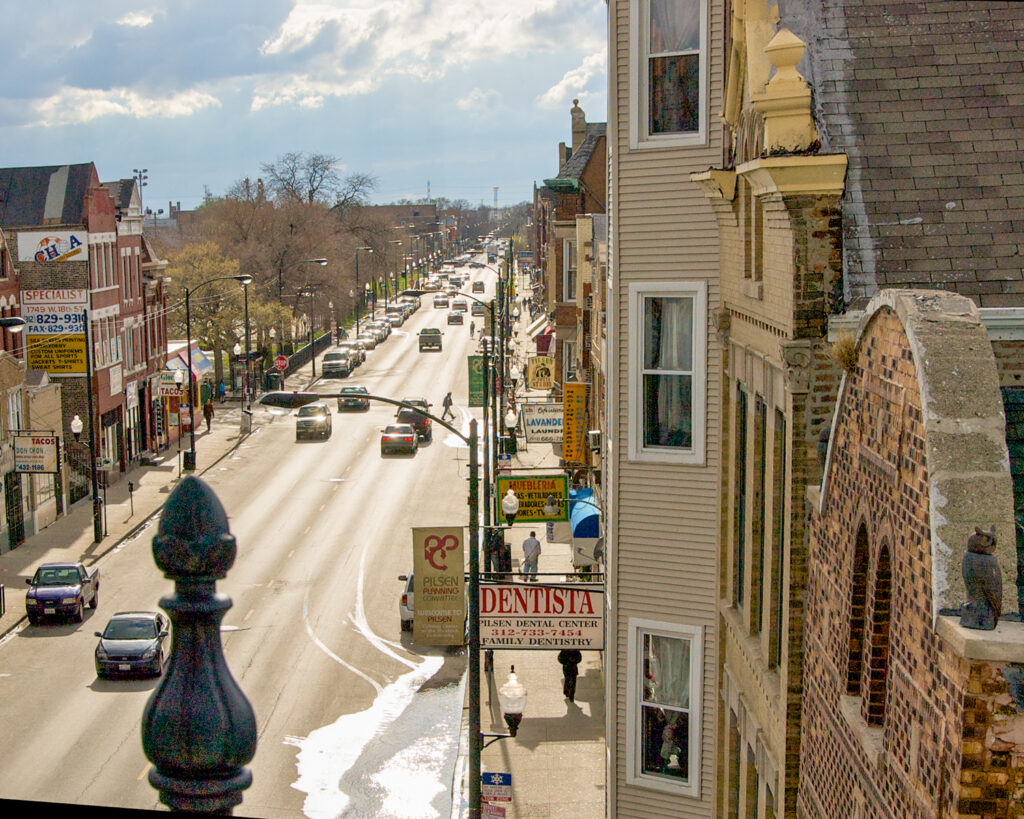 Mexicans in the Pilsen district Chicago belong to a long tradition immigrants starting in the 1840 when German and Irish settle in the area.  These early immigrants were labor workers who helped build the Illinois and Michigan Canal. In the 1870s Bohemian immigrants came to the area  and renamed the district after the city of Pilsen in the Czech Republic.  The construction of mayor highways and the campus of the University of Illinois at Chicago were responsible for the displacement of thousands of minorities around 1950. Many Mexican families moved to Pilsen as Eastern European residents relocated to the surrounding suburbs.  The character of the neighbourhood began to shift as murals depicting themes from Mexican culture were painted on the facades of the early Bohemian buildings. Spanish language signs in shop windows made it clear that the neighbourhood demographic had completely changed by 1970.

It was in the 1970s that Fiesta del Sol saw its beginnings. The Mexican community in Pilsen fought a two year campaign demanding the construction of a new high school for its young members.  In May of 1974 the Chicago Board of Education bent to the pressure and agreed to build what is now the Benito Juarez High School.  The people in celebration held a two-day long street party.  The celebration is repeated each year since, and is a symbol of what a community can achieve when they work together.  It is also a celebration of Mexican heritage, culture and language.

It was during this celebration in 2019 that I made the portraits of new and old Mexican immigrants in Pilsen.  They are part of what I call the “Mexicanidad Series” and exploration of what it means to be Mexican in and outside Mexico.   Richard Avedon said: “My photographs don’t go below the surface…They’re readings of the surface. I have great faith in surfaces. A good one is full of clues.”  This quote is the moto behind the entirety of the Street Portrait Project. How do these Mexicans in Chicago look like? can we see the traces of their migration in what they have on?, how are they different or similar to the the Mexicans in the portraits taken in Yucatan, Chiapas or Mexico City?  These are some of the questions that the series ask.  That is the surface that is to be read.  I have faith in these surface and I believe they are full of clues about the life of the people portrayed and the opinions and biases of the observer.

My mother, María de los Ángeles Hinojosa de Garciacano, crossed the Mexican-US border on a daily basis. For 20 years she lived in Nuevo Laredo, Mexico, and worked in Laredo, Texas.  After my father passed away she lived with my brother in Laredo Texas  and took care of my father’s shop in Nuevo Laredo.  A true life-long border crosser.